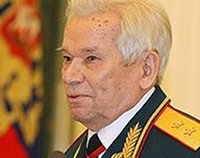 Ninety-three-year-old Mikhail Kalashnikov, the creator of the famous assault rifle, was taken to Moscow from Izhevsk in serious condition.

According to EMERCOM officials, doctors decided to send the prominent designer to Moscow due to the need of immediate examination. It was reported that Mr. Kalashnikov remains conscious, but his condition is estimated as serious. He was diagnosed with occlusion of blood vessels.

The aircraft with Kalashnikov on board landed in Ramenskoye, a town in the Moscow region.

Mikhail Kalashnikov is the only person who was twice awarded with the title of a Hero of Socialist Labor and a Hero of Russia. He created his famous assault rifle in 1949.