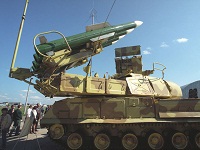 Russian President Vladimir Putin will pay a work visit to the Northwestern Federal District on June 19-21. In particular, on June 19, he will visit the Obukhov plant to chair the meeting devoted to the implementation of the State Armaments Program for 2011-2020 in establishing the technical basis of air and space defense."

The Obukhov plant is on the list of 100 most important strategic enterprises of Russia. The plant manufactures products for civil nuclear power, shipbuilding and other industries, as well as various weapons systems and military equipment, which operates in Russia and abroad.

It is a major Russian metallurgy and heavy machine-building plant in St. Petersburg, Russia. It was founded in 1863 to produce naval artillery based on German designs by Krupp. It has since been a major producer of artillery and other military equipment. V. Volodarsky was assassinated hwn making his way to meeting relating to industrial unrest in the factory. From 1922 to 1992 it was renamed Bolshevik Plant no. 232.