U.S. Department of Energy has named Russia a country with largest reserves of shale oil in the world. It goes about 22 percent of world reserves, or 75 billion barrels. The largest deposit of shale oil in Russia is the so-called Bazhenov formation in West Siberia. 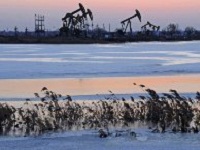 Shale oil is an unconventional oil produced from oil shale by pyrolysis, hydrogenation, or thermal dissolution. These processes convert the organic matter within the rock (kerogen) into synthetic oil and gas. The resulting oil can be used immediately as a fuel or upgraded to meet refinery feedstock specifications by adding hydrogen and removing impurities such as sulfur and nitrogen. The refined products can be used for the same purposes as those derived from crude oil.