The video that you are about to see has collected nearly four million views in four days. It shows real Russia and real Russians, which became a revelation to many foreigners worldwide. 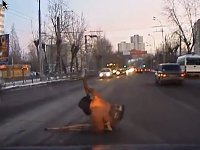 The video does not show Russians as alcoholics, drug addicts, or subhuman creatures that are no pleasant to dominate over. The video shows Russians as they are. Many people living all over the globe could hardly hold back their tears while watching the video. Here are just a few examples of what people wrote in comments:

- We﻿ love you RUSSIA

- I'm from Brazil. I have a driver's license for 15 years and never witnessed people helping each other like in the video on our roads. Something is﻿ very wrong with our people.