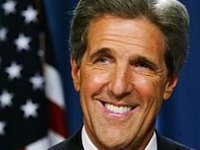 Russian President Vladimir Putin will have a meeting with U.S. Secretary of State John Kerry on Tuesday, May 7, when Kerry pays a visit to Russia, president's press secretary Dmitry Peskov said.

On April 29, in a telephone conversation with U.S. President Barack Obama, Putin expressed his willingness to have a meeting with the U.S. Secretary of State, when he arrives on a visit to Russia. During John Kerry's visit to Moscow, which will is to take place on May 7-8, a meeting with Russian Foreign Minister Sergei Lavrov is also scheduled.

The officials will discuss the situations in Syria and Iran, the upcoming summit of the Group of Eight and the situation around the missile defense system in Europe.