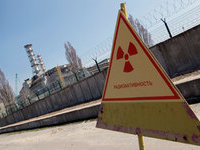 On Friday, April 26, the whole world remembers the victims of the disaster at the Chernobyl nuclear power plant. Liquidators of the accident, their children and grandchildren gathered in Moscow's Suvorovsky Park to mourn the victims.

The accident at the Chernobyl nuclear power plant in the Kiev region occurred on April 26, 1986 at 01:23 and became the largest man-made disaster in the history of mankind. The explosion of the fourth reactor spewed large amounts of radioactive substances that polluted the environment of several regions of Ukraine, Belarus and Russia.

More than 115,000 residents were evacuated from the 30-kilometer exclusion zone. The total radiation of isotopes released into the air made up 50 million curies, which was 30-40 times higher than during the nuclear bombing of Hiroshima in 1945.

More than 600,000 people were mobilized to liquidate the aftermath of the accident. Many of them suffered from radiation sickness. During the first three months after the accident, 31 people died, and over the next 15 years, radiation effects killed up to 80 people.