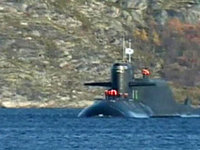 This year, the Russian Navy is to receive two submarine cruisers created under project 955 ("Borei") and a multipurpose nuclear submarine of project 885 ("Yasen"), Andrei Vernigora, a spokesman for the Defense Ministry, and Yuri Borisov, Deputy Defense Minister, told reporters.

In addition, Vernigora added that upon the completion of tests, the Navy of Russia would receive another nuclear cruiser - "Vladimir Monomakh".