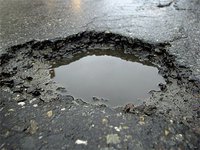 The town of Krasnokamensk, Russia's Trans-Baikal region, starts an unusual campaign on Tuesday, April 23rd. The campaign is called "Let's bury potholes together." The campaign was organized by the town authorities in conjunction with the traffic police and volunteers. In the course of the action, drivers will be taking pictures of potholes, calling them after their ex-wives and mothers-in-law.

The campaign is scheduled at 16:00 at the editorial office of "Glory to Labor" newspaper. All participants will receive leaflets, car stickers and flowers.

As planned by organizers, before photographing potholes, drivers will put a flower into it. Afterwards, traffic police inspector will assess the real size of the hole. On April 25th, traffic police will inspect all the marked potholes together with, and on April 27, the participants of the action, along with road services, will go to fix the roads.