On Sunday, 7th of April 2013, President Vladimir Putin joins the German Chancellor, Angela Merkel, at the opening ceremony of the industrial exhibition "Hannover Messe" in the Federal Republic of Germany. More than 160 companies have been invited to exhibit their latest industrial productions, including 11 specialized exhibitions. The Russian Federation is taking part for the second time. 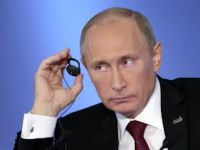 More than 100 Russian companies are participating with  overall exhibition space of 3.000 square metres. The Russian motto is "Global Industry", according to the Russian Federation's investment and modernization programme. Because 2013 is the year of cultural and economic exchanges between the Russian Federation and the Federal Republic of Germany, President Vladimir Putin has been invited as guest of honour. He will attend the Hannover Messe for two days.