Famous Soviet and Russian composer Oscar Feltsman has died in Moscow at age 92. 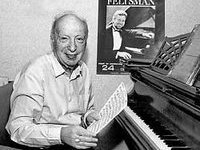 The author of such well-known songs as "Lily of the Valley" and "Manzherok" last night was rushed to the intensive care unit of the Central Clinical Hospital named after Semashko. Doctors fought for his life, however, they were unable to save the composer. Feltsman died of acute heart failure.

The songs written by Feltsman are loved by generations of Russian people. He wrote the song "I believe, my friends," that he penned in the spring of 1961, when Yuri Gagarin flew into space.

The composer died 14 days before his 92nd birthday.