Buses with Stalin to appear in Russian cities

On the 70th anniversary of the Battle of Stalingrad, buses with portraits of Stalin on them will appear in several Russian cities. From February 2, it will be possible to see such buses in St. Petersburg, Chita and Volgograd. The buses will have large portrait of Joseph Stalin on their sides. In Volgograd, there will be five buses like that in the streets. A ride will be free for all. 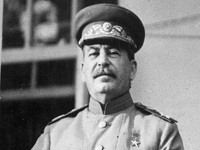 The money for the action was donated by "The Trade Union of Russian Citizens," the Communist Party, the so-called "People's Commissariat of Historical Authenticity" and movemenet "The Essence of Time."

Stalin's admirers agreed to conduct the action with private carriers. Vitaly  Milonov, a deputy from St. Petersburg, and Sergei Mitrokhin of Yabloko party spoke out strongly against the campaign. The latter even expressed his readiness to personally paint the Stalin portraits over, if the buses do appear in the streets.

Director of the Institute of World History of the Russian Academy of Sciences, Academician Alexander Chubarian, told Pravda.Ru that such actions were not necessary.

"I wouldn't do it. I think it will cause unnecessary public debate. In connection with the anniversary of the Battle of Stalingrad, one should pay tribute to the dedication of the troops, the tragedy of the people who suffered a lot there, so many people died. And we know who commanded the troops there," said the historian.