On January 7th, millions of Christians celebrate Christmas not only in the Russian Orthodox Church, but also in Serbian, Jerusalem, Georgian churches. Holiday services were held in more than 30 thousand churches across the globe. 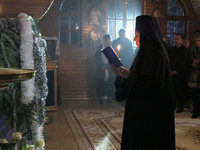 Christmas marks the end of the rigorous forty-day fast. Believers will continue to celebrate Christmas for 12 days, before January 19 - Epiphany.

"This holiday has been carrying the light of faith, hope and love for centuries. It unites us around traditional moral values ​​that play a special role in the history of Russia, and serve the backbone of our society. The Christmas season is the time of charity and mercy, sincere attention to those who need our help and care," President Putin said in his congratulations.

The President also noted that the interaction of the Russian Orthodox Church and other Christian denominations with government and public agencies has been strengthening during the recent years.

Putin celebrated Christmas outside Moscow. He arrived at the Trinity-St George's Convent, which is located near Sochi to attend the Christmas.

"To all Orthodox believers - Merry Christmas! Joy and prosperity to all of you,"  Medvedev wrote on his Twitter. The Prime Minister attended the night Christmas service at the Cathedral of Christ the Savior in Moscow.