Putin: 'When they slap us, we slap them back'

During the press conference, Putin answered the question of how anti-Western rhetoric may affect Russia's relations with other countries. 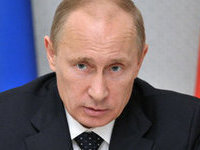 "We do not need the anti-Western rhetoric. But if we get slapped, we should slap in return," he said. Putin noted that Russia had never provoked anyone - "It's them provoking us," Putin said.

"We did not come up with the idea of reset - it was the USA to put it forward. Our relationship worsened after Iraq. I do not know how to judge what happened then. The country (Iraq) has collapsed, they have lost Kurdistan. Was it an adequate solution to the problem?" Putin said.

Putin told of his communication on the problem with U.S. President George W. Bush. Bush assured Putin that the actions to deploy the missile defense system were not directed against Russia. "There was nothing to worry about, he told me.  Then I said that we would develop missile complexes, and that the U.S. would not need to worry about anything either," Putin said.

"Let us at least write this on paper that it was not against Russia, but they refused. We must ensure security of the people of the Russian Federation," Putin said.