President Vladimir Putin continued to answer questions from journalists after his press conference, which took place on December 20th. 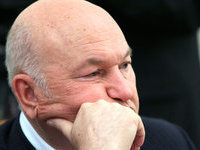 In particular, he said that there were several criminal cases filed against former mayor of Moscow, Yury Luzhkov, ITAR-TASS reports. When asked why Luzhkov has not been charged yet, Putin said: "It's still early."

The "big" press conference of Russian President Vladimir Putin took place on Thursday, at the International Trade Center on Krasnopresnenskaya Embankment in Moscow. Putin was answering questions for more than four and a half hours.

"The cases are being investigated, but so far no charges have been laid," officials at the ministry said.

Yury Luzhkov acts as a witness on the case of embezzlement at the Bank of Moscow, the press center of the ministry said , ITAR-TASS reported.