The work on the Russian aviation project of the hypersonic experimental aircraft, known for the Russian initials as GELA, has been shelved before 2014, RBC reports. 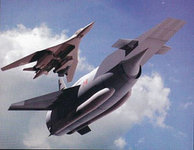 According to sources at Rainbow design bureau and the Central Institute of AeroHydroDynamics, the works on the Russian hypersonic experimental aircraft (GELA), which were conducted in Dubna (a town near Moscow) were suspended at least before 2014, KM.ru said.

According to sources, designers failed to resolve a number of technical issues. In particular, the aircraft can not develop hypersonic speed. Officials with the bureau also added that the GELA project had not been relevant for ten years already.

Rogozin has already refuted the rumors about the decision to shelve the project. The deputy prime minister tweeted a rhetorical question: "Think about it - is mankind ready to fly faster, higher and farther because of some technical problems?"

It is worthy of note that the United States refused from the project of piloted hypersonic aircraft in 2003 due to a very high cost of jet engines. The engines are necessary for the aircraft to develop a hypersonic speed. The US preferred to focus on drones instead.

Author`s name: Editorial Team
19:01
Putin: EU's refusal of Russian energy resources is an economic auto-da-fé
16:56
Finnish parliament votes for country's membership in NATO
15:47
Finnish admiral suggests Russians be buried in the land of Finland, as in 1939
13:06
Moscow says Finland and Sweden's entry into NATO will 'untie' Russia's hands
12:53
Kremlin declared the United States hostile to Russia
21:11
Ukraine blows up ammonium nitrate to accuse Russia of chemical attack
19:35
German Leopard 2A4 heavy tanks spotted in Ukraine
18:42
Russian large landing ships disappear from naval base in Novorossiysk
18:00
Chechnya thanks the West for the weapons supplied to Ukraine
17:46
Ukraine can skip Membership Action Plan on its way to NATO
Hotspots and Incidents
Up to 16,000 Ukrainian soldiers entrapped in Luhansk People's Republic