Prosecutors to investigate causes of gigantic traffic jam in Russia

The Office of the Russian Prosecutor General have started investigation into the factors that led to the appearance of many kilometers of traffic jams on M-10 Federal Highway Tver - St. Petersburg. The highway was paralyzed for several days after unusually heavy snowfalls. 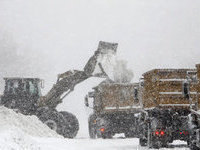 As part of the investigation, officials will look into the activities of various companies of the Russian Federal Agency for Roads that are responsible for maintaining the highway. Numerous reports have appeared in the Russian media describing unsatisfactory work of road services that failed to prevent the jams.

Last week, a heavy snowfall paralyzed traffic on M-10 highway. As a result of the snowfall, a gigantic traffic jam appeared on the road between Moscow and St. Petersburg. Reportedly, the total length of the jam was about 200 kilometers. Many drivers were trapped on the road for several days.

Angry drivers did not see the weather as the source of their problems. According to them, it was all because of the helplessness of road services that could not efficiently remove snow from the road.

The M10 is a federal highway in Russia connecting the country's two largest cities, Moscow and Saint Petersburg, and continuing to the border with Finland. Other than in the vicinity of Moscow and Saint Petersburg, the M10 is basically a two-lane highway (one lane for each direction), with an occasional third centre lane to allow overtaking or for left-turning traffic at intersections.