Russia to spend over 100 billion on nuclear weapons

Russia plans to spend 101.15 billion rubles on nuclear weapons in 2013-2015, the head of the Defense Committee of the State Duma Vladimir Komoyedov said. 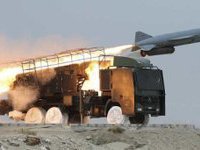 "The budget provisions under "The Nuclear Weapons Complex" section in 2013-2015 will amount to 29.28 billion rubles, 33.3 billion rubles and 38.57 billion rubles respectively," Komoyedov said, Vechernaya Moskva reports. The spending on nuclear weapons in 2012 made up 27.4 billion rubles, the politician said.

Komoyedov added that in 2012 the spending on nuclear weapons made up 27.4 billion rubles. The draft law "On the Federal Budget for 2013 and for the planning period of 2014 and 2015" will be discussed in the first reading on Friday, October 19, The Voice of Russia reports.

Earlier, the Commander of Russia's Strategic Missile Forces, Colonel-General Sergei Karakayev, said that Russia was planning to pass into service a new heavy intercontinental ballistic missile in 2018, wrote KM.ru. The payload of the missile will be five tons, which is four times as large as that of solid-fuel Yars and Topol missiles.

According to the adviser of the Strategic Missile Command, retired Colonel-General Viktor Yesin, the military stage of the rocket, which he sees as the successor to the legendary Satan, is to be equipped with several autonomous nuclear warheads. Up to ten of them will be false warheads.