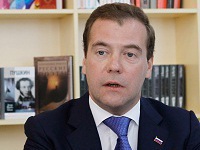 "We should ban smoking in public places and cigarettes sales on every corner. We should also ban the tobacco advertising completely and raise taxes for cigarette manufacturers to a meaningful level," Medvedev said in his video blog.

Until the end of October, the Government will consider the bill from the Healthcare Ministry that bans smoking in public places, RBC said.

"Frankly speaking, this document is sensitive to every Russian: non-smokers are eagerly waiting for its adoption, but some smokers call it an attack on the right to manage one's own health at one's own choice. But I am convinced that this bill meets the interest of the people of our country," Medvedev said.

The Prime Minister emphasized that neither the government nor the state were waging war against smokers, but were opposed to smoking. "Putting it straight, more than 80 percent of our citizens, including two-thirds of regular smokers, support the struggle against smoking. Let's free our country from tobacco addiction," he said.

As of today, four major foreign companies share the Russian tobacco market. All of them came to Russia in the early 1990s, Rosbalt reports. According to Medvedev, at that time the state did not consider the risks of tobacco foreign investment in the Russian economy.

"Having invested in advertising, design and the production of light, so-called women's cigarettes, tobacco companies have doubled their sales primarily at the expense of women and, unfortunately, children," said Medvedev.