The World Heritage Committee decided to include Lena Pillars (Lenskiye Stolby) Natural Park in the UNESCO World Heritage List. The park became the last object that was added to the list during the 36th session, which currently takes place in St. Petersburg. 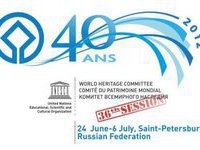 Lena Pillars National Park form the rock formations of rare beauty. They reach nearly 100 meters in height and are located along the banks of the Lena River in the central part of Yakutia, said the press service of the committee. They emerged in the sharply continental climate, where the difference in annual temperature may reach 100 degrees Celsius. The pillars are separated from each other with deep and steep ravines partially filled with frosted rock fragments.

The penetration of water from the surface accelerated the freezing process and contributed to frost action. The process created deeper and more dispersed ravines between the pillars. The proximity of the river and its flow are hazardous for the pillars. A variety of different species of the Cambrian period can often be found on the site.

The park received the unusual name of the was due to the vertically elongated ridge of rocks from the Cambrian limestone - the rock formed 500 million years ago, adds RIA PrimaMedia.

During the session of the Committee in St. Petersburg, the list was also added with objects in Chad, Congo, Palau and Palestine. In addition, the list now includes coastal landscapes of Carioca and the statue of Jesus Christ in Rio de Janeiro.

The objects included in the World Heritage list also include: decorations of village houses in the rural province of Helsingland (Sweden), a monument to the Stone Age in Catal Hüyük (Turkey), which includes two hills in the southern part of the Anatolian plateau, mining complexes in Wallonia (Belgium) and a mountain range of Western Ghats (India).