Prophet Muhammad's three hairs were delivered to Russia's Chechnya Republic from Turkey yesterday. The relic will rest in the republic for good. 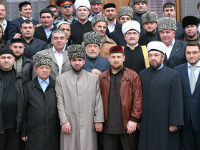 The gift came from Turkish Prime Minister Recep Tayyip Erdogan as a token of respect to the Chechen nation, Yuga.ru website reports. This is the first time, when Turkey makes such a gift. Until recently, the holy relic could be taken out of Turkey to be displayed to Muslim believers from all over the world.

A delegation of the Chechen diaspora in Turkey brought the relic to Grozny, the capital of Chechnya. Thousands of local residents, including Chechen President Ramzan Kadyrov, took to the streets to welcome the relic despite severe winter cold. A special service devoted to the event was arranged at the central mosque of the republic.

A week ago, on January 26, another hair of Prophet Muhammad was delivered to Chechnya from Uzbekistan. The hair was taken to the Akhmad Kadyrov Mosque, the central mosque of Grozny.

"This is a huge event in the life of Muslims of not only our republic, but of the whole Northern Caucasus and Russia in general. The hair of the Prophet will at first be delivered from the airport to The Heart of Chechnya Mosque. Afterwards, it will travel across the republic, so that all our residents could see the relic," a Chechen mufti said.