Over 50% of Russians ready to vote for Putin 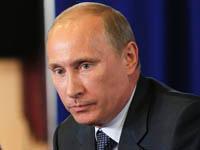 When asked "Whom would you vote for if the presidential elections were held this Sunday?" 52 percent of respondents said that they would vote for Putin. The previous poll on the same subject showed a slightly lower result - 49 percent.

Eleven percent said that they would not take part in the vote at all. Previously, this opinion was expressed by nine percent of respondents.

The poll was conducted among 1,600 people in 153 settlements situated in 46 regions and republics of Russia.