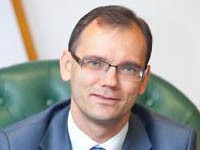 On December 13, Vice President of Yakutia Republic, Dmitry Glushko, took part in the opening of the VII Republican Christmas Readings. The readings took place under the title "Morally oriented education: Traditions and contemporariness." The readings were conducted for the spiritual and moral education of the youth.

"We need to create the platforms where we will be able to speak about faith and God openly," the vice president said.  Glushko also said that officials representing executive power and municipal administrations participate in the readings more actively from year to year.

In addition, Dmitry Glushko paid attention to the importance of the development of the spiritual and educational center named after Saint Bishop Innokenty, which had been recently transformed into a seminary.

The rector of the Russian Orthodox University, Pyotr Yakunin, told about the project of rmote education on the directions of church service. The program can teach church clerics online so that they could master various social professions to continue working on the principles of faith and church service.

Pyotr Yakunin stated that the Yakut eparchy was one of the most dynamically developing eparchies in the Far East. Therefore, the project would be launched in Yakutia. The first group of 30 people will be created in February 2012. The group will be involved in the remote education project on various social directions.