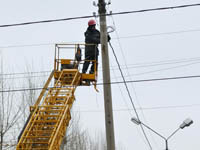 As many as ten quarters of the city of Ulan-Ude, the capital of Russia's Buryatia Republic, were left without electricity. The blackout occurred when a crow flew into the electric power substation, which caused a short circuit of the equipment.

The press service of JSC Ulan-Ude Energo said that the incident took place on Monday.

"An oil circuit breaker and six isolators came out of order," officials said.

Ten quarters of the republican capital were left without electricity. The substation was fixed several hours later; the supplies of electricity in the city were resumed.

It is not the first time when birds cause blackouts in Buryatia. Last year, a crow cut power supplies in a local settlement as a result of a similar incident, Pravda.Ru says.

The local authorities decided to install special equipment at substations to scare birds away.