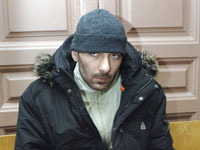 Aleksanyan was diagnosed with HIV a few months after his arrest in 2006. He was charged with money-laundering, tax evasion and embezzlement.  Afterwards,  he contracted tuberculosis and went nearly blind. According to the prosecution, he embezzled property and shares from Tomskneft and VNK oil companies, RIA Novosti reports.

Aleksanyan was released from custody in December 2008 after posting bail of 50 million rubles ($1.6mn at current rates). The bail was returned after the court announced its decision to dismiss the case. Charges against him were dropped in 2010.