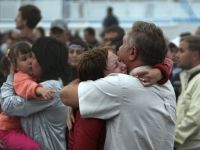 Latest reports from the Russian Federation indicate that 89 people are dead or missing after a passenger boat sank on the River Volga in the Republic of Tartarstan.

The Emergencies Ministry of the Russian Federation declared today that 84 people have been accounted for and are safe, while there are two confirmed deaths and 87 missing, after the passenger ship Bulgaria, carrying 173 people (140 passengers and 33 staff) from Bolgar to Kazan sank at 09.58 GMT near the village of Syukeyevo in the Kansko-Ustinovsky district, Republic of Tatarstan.

Some of the survivors were rescued by the Arabella, a boat that was passing. The Russian authorities are opening a criminal case concerning the accident on charges of violation of safety laws. Some reports declare that there were too many people on board. 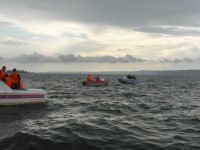 President Medvedev ordered the investigation to be opened to find those responsible for this tragedy.

The boat was around fifty years old and sank in bad weather conditions, with heavy rain and high winds. The boat was three kilometres away from the shore when it sank in a few minutes. There are reports that there were dozens of children on board.