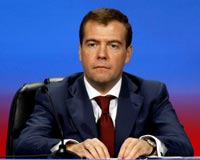 The Kremlin drove 800 journalists to President Dmitry Medvedev's showplace business school outside Moscow on Wednesday for the first major news conference of his presidency, an all-day logistical endeavor that led to high expectations for a big announcement.

Medvedev, however, used his 2 hours 15 minutes with Russian and foreign journalists to tell them he has not yet decided whether to run for another term as president, assure them that he and Prime Minister Vladimir Putin think very much alike, and suggest that the New START nuclear treaty with the United States could fall apart if Russia perceives that the proposed missile defense system in Europe is aimed at Russia, despite U.S. assurances to the contrary, according to .

"I hope that they [NATO] would respond to the questions put forward by President Barack Obama and me, and we will be able to forge a missile defense cooperation model. If we don't, then we will have to take retaliatory measures... then we will have to force the development of our strike nuclear potential," Medvedev told, says.