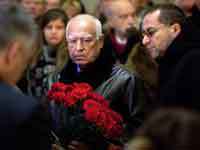 Viktor Chernomyrdin, aide to the Russian president and prime minister of Russia during the country's turbulent years from 1993 to 1998, died in Moscow this morning, November 3. He was 73.

Chernomyrdin died at 4:00 a.m. at his home, his relatives said. He was conscious until the last moment.

Viktor Chernomyrdin will be buried at Moscow's Novodevichye Cemetery, next to the grave of his wife, Valentina.

Chernomyrdin chaired the Russian government from December 1992 to March 1998. In 2001-2009 he served as Russian Ambassador to Ukraine. Afterwards, he was appointed an aide to the Russian president for economic cooperation with CIS members.

Chernomyrdin's father was a labourer. Viktor was one of his five children. Chernomyrdin completed school education in 1957 and found employment as a mechanic in an oil refinery in Orsk. He worked there until 1962, except for two years of compulsory military service from 1957 to 1960. His other occupations on the plant during this period included machinist, operator and chief of technical installations.

In 1962, he was admitted to Kuybyshev Industrial Institute (which was later renamed Samara Polytechnical Institute). In his entrance exams he performed very poorly. He failed maths and had to take the exam again, getting a C. He got only one B in Russian language, and Cs in the other tests. He was admitted only because of very low competition. In 1966 he graduated from this institute. In 1972 he completed further studies at the Department of Economics of the Union-wide Polytechnic Institute by correspondence.

In Russian-speaking countries, Chernomyrdin was famous for his numerous malapropisms and syntactically incorrect speech.

One of his expressions "We wanted the best, but it turned out as always" about the economic reforms in Russia became a popular proverb. The phrase was uttered after a highly unsuccessful monetary exchange performed by the Russian Central Bank in July 1993.