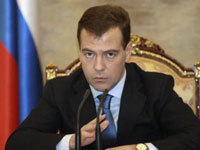 Russia and Norway signed an agreement to settle a four-decade-long border dispute over the energy-rich Barents Sea and Arctic Ocean, paving the way for more cooperation on oil and gas production.

The accord was signed during Russian President Dmitry Medvedev's meeting today with Norwegian Prime Minister Jens Stoltenberg in the Russian Arctic city of Murmansk, the base for OAO Gazprom's Shtokman gas project about 550 kilometers (340 miles) offshore in the Barents Sea.

The two countries, which both cross the Arctic circle and share a 196-kilometer border, have been discussing their maritime territories since the early 1970s, Bloomberg reports.

According to The Russian News & Information Agency RIA Novosti, Medvedev said the treaty would "open a new page in bilateral relations" and boost cooperation in the energy and fishing sectors.

"This event should influence the general situation in the region, strengthen the regime of international and regional security and improve further cooperation between the Arctic states," Medvedev said, adding that the parliaments of the two states would ratify the treaty simultaneously.