Russian President Dmitry Medvedev started a two-day visit to Ukraine on Monday which will test the new close relationship between the two powers and stake out its limits. 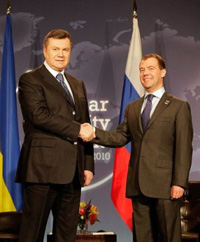 Yanukovych, whose policies towards Russia appear to be much friendlier that that of his West-leaning predecessor, has completely reversed Ukraine's position on the famine, saying it was "incorrect" and "unjust" to consider the Holodomor a fact of genocide of a certain people as it was "a common tragedy" of the Soviet people.

The Parliamentary Assembly of the Council of Europe (PACE) adopted a resolution in late April saying that the regime of Soviet leader Joseph Stalin was responsible for the Great Famine, which is believed to have been caused by Stalin's poor economic and trade policies. Medvedev arrived in the Ukrainian capital earlier on Monday to hold talks with Yanukovych and sign a range of bilateral agreements, RIA Novosti informs.