Russia signed an agreement on building a power plant with four nuclear reactors on Turkey’s southern coast at a cost of about $20 billion after more than a year of negotiations. 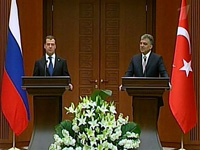 “This will be the first case in which Russia not only builds a power plant, as we have in Iran and India, but will also own it,” Sergei Kiriyenko, head of Russian state nuclear holding company Rosatom Corp., told reporters in Ankara during a trip by President Dmitry Medvedev to the Turkish capital, BusinessWeek informs.

Medvedev said they also agreed to work on a pipeline project that would pump Russian oil from Turkey's Black Sea coast to the Mediterranean. It will run from the Black Sea port of Samsun to the Ceyhan oil terminal on the Mediterranean where an oil refinery will be set up, The Associated Press reports.