Terrorists Cause Chaos in Moscow

Two suicide bombers have caused chaos in central Moscow this morning, Monday March 29 in a coordinated attack on two Metro stations: Lubyanka (07.56 MSK) and Park Kultury (08.38). Provisional data indicate that there are a total of 37 dead. 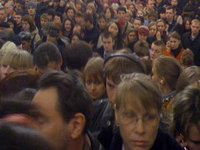 Terrorists Cause Chaos in Moscow

The attacks were not claimed, but the Mayor of Moscow Yuri Luzhkov said at a press conference outside the Park Kultury station had been perpetrated by "two suicide bombers."

The first explosion at 07.56 MSK (04.56 GMT) occurred on a Metro train station in the Lubyanka, high-traffic station (the metro in Moscow is 5.5 million passengers a day) at the intersection of the lines Sokolnicheskaya and Tagansko-Krasnopresnensyaya. It caused 14 deaths in the carriage and another 11 on the platform and took the second carriage.

The second explosion happened at station Park Kultury, also in line Sokolnicheskaya to 08.38 (05.38 GMT). 12 people died in the carriage at the back of the meters as they entered the composition.

The last time these dogs perpetrated an attack against citizens in Moscow was in February 2004, killing 41 people.

Investigations are continuing, but it is more than obvious that there are two Shahidi, Caucasian women bombers who made a pact of blood with these nuts to "honor" the death of male family members with this kind of cowardice.