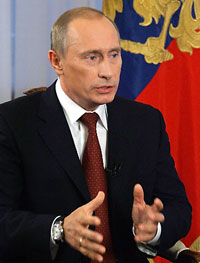 The two largest nuclear powers say they are close to agreeing on a successor to the 1991 Strategic Arms Reduction Treaty (START I), although U.S. President Barack Obama and Russian President Dmitry Medvedev have yet to clinch a deal.

Asked by a reporter what the biggest problem was in the talks, Putin said: "What is the problem? The problem is that our American partners are building an anti-missile shield and we are not building one."

Speaking to reporters in the Far Eastern Russian city of Vladivostok, Putin said the U.S. plans would fundamentally disrupt the Cold War balance of power and Russia would thus be forced to develop new offensive weapons, Reuters informs.

Terming it as an "excellent New Year gift to Russia," Putin said the "strategic project enables the country to enter new markets in the Asia-Pacific region."

The first phase of the ESPO project costing 360 billion rubles ($12.1 billion) was completed in less than five years. The 4,000 kilometer pipeline that runs from Taishet in eastern Siberia to Nakhodka will enable Moscow to reduce dependency on European customers, RTT News informs.

The project is designed to pump up to 1.6 million barrels (220,000 tons) of crude per day from Siberia to Russia's far east and then on to China and the Asia-Pacific region.

According to news agency RIA Novosti, the project's first leg envisages construction of a 2,757-kilometer section with annual capacity of 220.5 million barrels of crude.