Medvedev Speaks about Presidency and the Country's Prospects

The present Russian ruler said he had a "special relationship" with Prime Minister Vladimir Putin, who many Russians believe is still the country's paramount leader, though he struck a wistful tone when asked about his role, lamenting a lack of freedom. 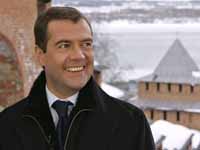 Medvedev Speaks about Presidency and the Country's Prospects

In May  Medvedev will mark the mid-term of his presidency after nearly two years of speculation that Putin may one day return as president.

"The life of the first person, of the top leaders, is an array of limits and the saddest thing is that you only feel them at the moment when you start this work," he said.

The interview, lasting 1 hour 21 minutes, contrasted sharply with Putin's confident 4-hour televised question-and-answer session with the Russian people on Dec 3, when he ruled out leaving politics and hinted he could run in 2012 presidential elections.

Putin presided over Russia's longest economic boom in a generation while president, although Russia was hammered by the economic crisis half a year after he left office in May 2008.

Medvedev said the crisis had shown the vulnerability of Russia's economy, which he said had contracted by at least 8.7 % in 2009, the worst performance in 14 years.

"We still have an economic system which is based on the energy market," he said. "Without modernization, our economy has no future even though it relies on huge natural riches."

Both Medvedev and Putin admit that Russia has survived the worst period of economic downturn and still the country, its people and its management must work hard to keep the state's economy afloat and return it the status of great country.