NATO Chief Arrives in Moscow with Many Strange Requests

NATO chief Anders Fogh Rasmussen was to meet Russian leaders Wednesday in Moscow, the first visit by a head of the Western military alliance since the Georgia war blew a Cold War chill through ties. 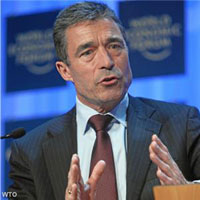 NATO Chief Arrives in Moscow with Many Strange Requests

Furious disputes over Russia's actions in its war with Georgia last year led to a halt in cooperation between the two sides, but Rasmussen has vowed to rebuild trust since taking office in August.

"Given the announcements by the new NATO secretary general about increasing the quality of partnership with Russia, special attention will be put on activating cooperation to increase trust," the Kremlin said in a statement ahead of the visit.

It said the two sides would also discuss important international issues, including Afghanistan, Iran's nuclear programme and the peace process in the Middle East.

Rasmussen is to meet all the key players in Russia in a packed schedule of meetings on Wednesday, including Prime Minister Vladimir Putin, President Dmitry Medvedev and Foreign Minister Sergei Lavrov, AFP reports.

According to Itar-Tass, NATO is interested in the growth of the transit of military cargoes across Russia to the countries bordering on it, NATO Secretary-General Andres Fogh Rasmussen, now on a visit in Moscow, said on Thursday.

During the talks we discuss problems of military cargo transit to Afghanistan via Russia. We are grateful to Russia for giving such a possibility for the NATO member states, he said.

The NATO Secretary-General said NATO would be interested in the growth of the transit of military cargoes across Russia and, in the first place, we would like to have an opportunity to transport military cargoes by air.

Aside from it, we would like to sign similar agreements with Russia’s neighbour countries, otherwise the potential of the transit will not be used to the full, he added.