Not coincidentally it  was snowing in Russia today,  the country observed a national day of mourning on Monday for the victims of a horrific nightclub fire in the Urals. 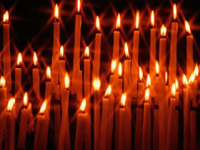 The death of two more people in hospital brought the death toll from Saturday's blaze in Perm's Lame Horse nightclub to 113. Over 120 people are still being treated in hospital, with 28 of them in a critical condition, according to the Russian Health Ministry.

Flags are flying at half-mast and memorial services are being held. Three of the dead were buried on Sunday, and the bulk of the victims will be laid to rest later on Monday and on Tuesday.

Russian Prime Minister Vladimir Putin said on Monday that no effort would be spared to assist the survivors of the blaze, which began during an indoor firework display. President Dmitry Medvedev has demanded tougher penalties for fire safety violations.

Patriarch Kirill of Moscow and All Russia called for prayers for the dead.

The club's owner is in police custody.

Russia has an appalling fire safety record. According to the country's emergency services, 15,165 people died in fires across the country in 2008, including 584 children. On average, 42 people die daily in Russia in fires. In the U.S., with a population over twice as large, the figure is around 3,400 deaths a year.

The fire came a week after a terrorist attack on a Moscow-St. Petersburg luxury train killed 26 people and injured over 90.