Medvedev Insists on Cooperation for Protection against Nuclear Threat 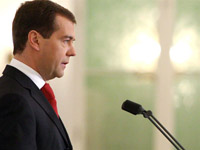 Medvedev Insists on Cooperation for Protection against Nuclear Threat

At a joint news conference with visiting Indian Prime Minister Manmoham Singh, Medvedev indicated that Russia is interested in strict control over nuclear weapons "so that they aren't taken hostage by any kind of radicals; so that they won't be used to start any kind of conflict or even threaten neighbors."

"This touches on all countries. This touches, of course, upon the Iranian nuclear program," and that of other states, Medvedev said without naming any.

Russia has until recently been hesitant in showing support for new U.S.-led sanctions against Iran in response to its defiance of an enrichment ban. But Tehran's intentions announced at the end of November to build 10 new uranium enrichment plants appeared to have tipped the balance in Moscow in favor of tougher trade punishment.

"I'll say it openly: Moscow has no interest in expanding the nuclear club," Medvedev said.

Singh is in Moscow on a three-day visit to strike a number of defense and energy deals worth several billion dollars.

State news agencies quoted the country's nuclear energy chief Sergei Kiriyenko as saying that Russia may build up to 20 reactors at three sites in India.

"Nuclear cooperation between the Russian Federation and India in my view has a very big, a very good future," Medvedev said.

Singh said he was "most satisfied" with the talks, which he called "a major step forward."

Singh, who was to meet Prime Minister Vladimir Putin later Monday, praised the countries' economic ties, adding they were shooting for $20 billion in bilateral trade by 2015.
Business Week has contributed to the report.