Russia is marking a day of mourning for victims of Saturday's nightclub fire in the city of Perm. The accident has sparked allegations of corrupt oversight of national safety standards. 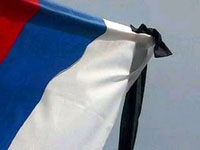 Flags throughout Russia are at half mast by order of President Dmitri Medvedev. Churches, mosques and synagogues are conducting memorial services. Major TV channels have suspended entertainment programming. In the city of Perm, the area around the Lame Horse nightclub where the tragedy occurred is strewn with flowers left by local residents shaken by the loss of so many of their own, Voice of America reports.

The death of two more people in hospital brought the death toll from Saturday's blaze in Perm's Lame Horse nightclub to 113. Over 120 people are still being treated in hospital, with 28 of them in a critical condition, according to the Russian Health Ministry, RIA Novosti informs.

According to CNN, the fire broke out Friday night in the Ural Mountain area industrial city of Perm, sweeping through a party in full swing at the Lame Horse, a nightclub celebrating its eighth year in business. An estimated 300 people were in the club.

Authorities have cited five suspects. Three people are suspected of violating fire safety regulations, and the director of the company that supplied and installed fireworks equipment in the nightclub could face manslaughter charges, said Marina Zabbarova, head of the Perm territory branch of the Investigative Committee. Authorities detained those four suspects.

Funerals continued today amid an outpouring of grief in the city of 1 million people. Sadness has quickly turned into rage as officials and citizens alike blasted lax fire regulations and the business of inspectors plying bribes out of owners who don't stay up to code.

"They have no brains and no shame," Medvedev said of the party's organizers. "They showed complete indifference to what was going on. I saw the reports, they even tried to flee. They need to be punished to the full extent," ABC News.