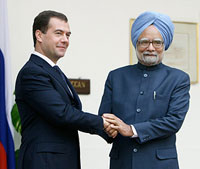 President Dmitry Medvedev and Indian Prime Minister Manmohan Singh oversaw the signing of the agreements that run from 2011 to 2020, according to the Kremlin press service. Under one accord, Russia will service weapons systems delivered to India. The two countries also agreed to develop and produce a multi-purpose transport airplane, Bloomberg informs.

"Russia views India as one of the deserving candidates for the seat of permanent member in the expanded UNSC," says a joint declaration signed here after summit talks between Prime Minister Manmohan Singh and Russian President Dmitry Medvedev.

The two sides also reiterated their intention to strengthen their cooperation on the issues concerning the reforms of UN and its Security Council, Hindustan Times informs.

At a joint news conference with visiting Indian Prime Minister Manmoham Singh, Medvedev indicated that Russia is interested in strict control over nuclear weapons "so that they aren't taken hostage by any kind of radicals" so that they won't be used to start any kind of conflict or even threaten neighbours."

"This touches on all countries. This touches, of course, upon the Iranian nuclear program," and that of other states, Medvedev said without naming any.

Russia has until recently been hesitant in showing support for new US-led sanctions against Iran in response to its defiance of an enrichment ban. But Tehran's intentions announced at the end of November to build 10 new uranium enrichment plants appeared to have tipped the balance in Moscow in favour of tougher trade punishment.

"I'll say it openly: Moscow has no interest in expanding the nuclear club," Medvedev said, according to GulfNews.