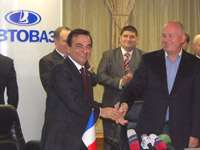 Renault, with its Japanese ally Nissan (7201.T), will provide 300 million euros ($447.8 million) via technology transfer to the heavily-indebted Lada maker in which the French carmaker bought a 25 % stake for $1 billion two years ago to share a touted sales boom.

But AvtoVAZ has been hit hard by a spectacular fall in demand in Russia, which was set to overtake Germany as Europe's largest car market before the global auto sector crisis struck.

Car and light vehicle sales are down 51 % in the first 10 months in Russia. Sales last year were 1.45 million units.

Esteve was part of a group of French and Russian business leaders at a meeting at Rambouillet near Paris where a flurry of deals were signed in the presence of Russian Prime Minister Vladimir Putin and his French counterpart Francois Fillon.

Esteve said Renault would contribute 240 million euros and Nissan 60 million in what Putin said would be help through technology.

He said direct financial investment would follow later and Renault and AvtoVAZ would start production of Nissan models in the extreme east of Russia.

Putin said the Russian state would also provide 50 billion roubles ($1.73 billion) to the company to cushion the impact of the crisis on the workforce and he said Renault may increase its stake.