Russian President Dmitry Medvedev has invited U.S. Secretary Hillary Clinton to his private residence in suburban Barvikha for a discussion Tuesday on a broad range of issues in what one senior State Department official called a "relaxed setting." 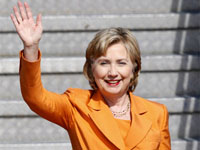 Issues on the agenda for the two-hour meeting include the next steps on Iran, the Mideast conflict, cooperation on Afghanistan, possible joint work on a missile defense system, Russia's "neighborhood" and climate change.

Clinton also will meet with Foreign Minister Sergey Lavrov, following up on many of the same issues, as well as getting progress reports on the new bilateral presidential commission they jointly chair.

The commission, created by presidents Medvedev and Barack Obama during the latter's July visit to Moscow, has 16 working groups dealing with a number of aspects of the relationship, from arms control to health care.

A key issue during Clinton's two-day visit to Russia will be arms control and reaching an accord to replace the 1991 Start II arms control agreement, which expires in December.

Also at the top of the agenda are Iran and international efforts to induce Tehran to end its nuclear program. A senior administration official said Clinton will speak with Medvedev and Lavrov "about what specific forms of pressure Russia would be prepared to join the U.S. and other nations in."

The Obama administration has been cautiously optimistic about previous comments by Medvedev that sanctions "sometimes are inevitable." Russia traditionally opposes sanctions and Prime Minister Vladimir Putin has been highly critical of such steps.

During her visit, Clinton also will meet with members of Russia's civil society, including human rights leaders. She will stop by a center where Russian engineers design airplanes for U.S.-based Boeing.

She will hold a town-hall-style meeting with students at Moscow State University, attend an opera at the Bolshoi Theater and participate in the dedication of a statue to American poet Walt Whitman.

The CNN  contributed to the report.