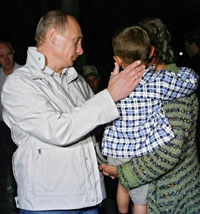 Valdimir Putin, Russia’s Prime Minister criticized the US administration for assisting Georgia in airlifting its troops from Iraq to South Ossetia.

Putin said Monday that the U.S. move will hamper efforts to solve Russia's conflict with Georgia over the breakaway province of South Ossetia. The U.S. military has begun flying 2,000 Georgian troops home from Iraq after Georgia recalled them.

The Russian-Georgian conflict blew up after a Georgian offensive to regain control of the unrecognized republic of South Ossetia.

Georgian troops fled South Ossetia on Sunday, yielding to superior Russian firepower, and Georgian leaders pleaded for a cease-fire. Moscow responded that Georgia was not observing its cease-fire pledge.