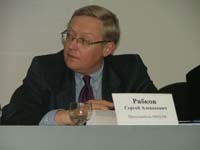 The Organization for Security and Cooperation accused Russia of placing "unprecedented" limits on election observers seeking to monitor Russia's March 2 vote. If Russia refuses reconsidering the conditions the OSCE could refrain from sending a mission, the AP reports.

But there was n basis for such complaints, chief of the Russian Foreign Ministry's European Cooperation Department Sergei Ryabkov said. He noted that election monitors could properly assess the election.

Ryabkov said the OSCE "must chose: whether to join a constructive and clear movement to single election monitoring standards, or continue its political games, which we do not accept."

The Russian Presidential election of 2008, scheduled to be held on March 2, 2008 is widely expected to be a race between Dmitry Medvedev, a Kremlin-backed candidate supported by incumbent president Vladimir Putin, the candidates of the Communists and right-wing opposition, and nominees from the liberal opposition.

The second popular candidate is Gennady Zyuganov – the leader of the Communist Party of the Russian Federation and former presidential candidate, who ran for President in 1996 (when he came short just a few percent of the votes) and 2000, but not in 2004. Officially nominated on 2007-12-15 with 215 of 218 votes in favor. Registered candidate on December 19.