Kirov region continues to surprise Russia with its acheivements. Kirov region shows phenomenal achievements in the field of demography, professional training and agriculture. Last year Kirov region together with St.-Petersburg was given the presidential program diploma for active professional management training. In the “Year of family” a special medal of «Family glory» will be adopted in the region. 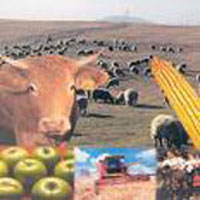 Family dynasties and foster families, which number considerably increased in 2007, will be given proper attention in 2008. Growing birth rate in the region has been observed since 2002. Only last year the number of newborns increased by 7 percent, while death rate decreased by 7 percent. One more positive moment: the number of marriages in Kirov region has increased noticeably. Previously this index made 7 marriages out of one thousand people, now the index has grown up to 7,9.

The regions of Volga federal district produce more than a quarter of all agricultural products in Russia. 28 percent meat, 33 percent milk, 25 percent eggs of the all-Russian volumes is produced in the district. With the productivity of 27-28 centners from hectare, the share in the all-Russian total grain gathering makes 26.6 percent.

Kirov region led by governor Nikolay Shaklein has helped a lot in achieving these figures. Representing the region at the international agricultural exhibition "Green week-2008", Nikolay Shaklein said, that Kirov region can play a very important part in the district’s development and can be a favorable and stable partner in agricultural products production. He also said it is necessary to use competently the region’s geographical position in a watershed zone as there is almost no possibility of droughts in the region, and good forage reserve for cattle is formed annually.

The governor also said that it can be very profitable for the region to process neigh, colza and flax . It is proved by scientists, that a rye produced in Kirov region is the best not only in the European part of Russia, but also in Europe as far as baking qualities are concerned.Moreover Kirov region has good prospects for development of biotechnology, such as organic motor fuel production - biodiesel fuel based on colza and bioethanol based on rye.

Nikolay Shaklein believes that alongside with being the largest power country in the world Russia has the prospect to become the largest food producer. Today when the world growth in food prices reached Russia, it is especially urgent. The needs for qualitative, ecologically pure foodstuffs will obviously continue to grow.

In the framework of the exhibition Nikolay Shaklein suggested investing into construction of a dairy plant or into the reconstruction of the operating dairy plants. According to Shaklein, today milk production in the region exceeds its needs. And more than 30 thousand tons of milk is taken out of the region.

Speaking about Kirov’s delegation and the projects presented, Nikolay Shaklein said that business circles of Germany have already shown interest in a number of innovative projects presented by LLC Vyatsky Agrokontsern. Among the projects there is development and introduction of new generation of highly effective and safe preservatives for agricultural production, development of alternative energy sources.

The projects of Vyatskaya State Agricultural Academy especially in the field of spring barley selection and animal industries caused great interest among German businessmen. The representatives of OAO “Bulochno-konditerskii kombinat” and Joint Stock Company “Agrofirma Doronichi” are negotiating with potential partners the possible supplies to Germany.

According to Kirov governor, such exhibitions are useful: participants expand an outlook, get additional experience and an opportunity to correct the work in view of modern requirements, that finally reflects in the flow of investments. For regions it has double benefit as they represent themselves not only to foreign partners, but also to each other.