Dmitry Medvedev good lawyer - and how about president? 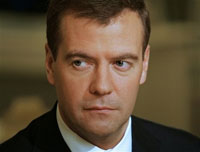 Dmitry Medvedev good lawyer - and how about president?

President Vladimir Putin’s choice to be his successor is a good lawyer, loyal aide and government technocrat. But he has never been a political leader.

But nevertheless, Dmitry Medvedev is likely to be elected on Martch 2.

Bow almost all the political analysts are considering whether Medvedev will just be Putin’s puppet or a decisive political leader.

Medvedev was born to a family of university teachers and raised in a proletarian suburb of Leningrad — Kupchino.

Anatoly Sobchak, an early democrat politician of 80's and 90's, was one of his professors, and Medvedev later participated in Sobchak's successful Saint Petersburg mayorial campaign.

In 1990 he worked in Leningrad Municipal Soviet of People's Deputies. Between 1991 and 1999 he worked as a docent at his old university, now renamed Saint Petersburg State University. In 1991 - 1996 Medvedev also worked as a legal expert for the Committee for External Relations of the Saint Petersburg Mayor's Office under Vladimir Putin.

In November 1993, Medvedev became the legal affairs director of Ilim Pulp Enterprise, a St. Petersburg-based timber company. In 1998, he was elected a member of the board of directors of the Bratskiy LPK paper mill. He worked for Ilim Pulp until 1999.

In November of 1999 he became one of several St. Petersburgers brought by Vladimir Putin to top government positions in Moscow. In December of the same year he was appointed deputy head of the presidential staff.

Dmitry Medvedev became one of the politicians closest to President Putin, and during the 2000 elections he was head of the presidential election campaign headquarters.

In November 2005, he was appointed by President Vladimir Putin as First Deputy Prime Minister, First Deputy Chairman of the Council for Implementation of the Priority National Projects attached to the President of the Russian Federation, and Chairman of the Council's Presidium. A mild-mannered person, Dmitry Medvedev is considered to be a moderate liberal pragmatic, an able administrator and a loyalist of Putin.

However, on December 10, 2007, President Putin announced that Medvedev is his preferred successor. Four parties supporting Putin also declared Medvedev to be their candidate to the post - United Russia, A Just Russia, Agrarian Party of Russia and Civilian Power. United Russia held its party congress on December 17, 2007 where by secret ballot of the delegates, Medvedev was officially endorsed as their candidate in the 2008 presidential election.

For about a year, Medvedev and the other first deputy prime minister, Sergei Ivanov, have been featured in television news features on their visits to factories, farms and hospitals. The programs showed their constrasting styles: Medvedev's terry-cloth personality versus the sandpapery Ivanov, Putin's former defense minister and a onetime KGB agent.

Some experts surmise that Putin may be trying to ensure that the siloviki - the intelligence, military and security veterans - don't become too powerful.