By Margarita Snegireva. Russia freed the captain of Japanese fishing boat because he had chronic medical problems. His boat and three others were detained a week ago in waters claimed by both countries. 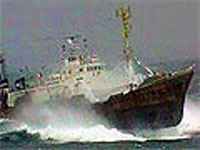 Japanese Foreign Ministry official said that Shigemi Fujimoto was picked up by coast guard ship and taken to the northern Japanese port of Nemuro .

Fujimoto, who has diabetes and high blood pressure, has no injuries and is good condition, the officials report.

Japan was still negotiating the hand-over of 10 other fishermen who were seized with Fujimoto last week.

The Foreign Ministry official said four were being detained on Kunashiri Island , one of four island groups held by Russia since the end of World War II, but claimed by Japan .

The other six were on another disputed island, Shikotan, the official said, adding the reason they were separated was not known.

Under an agreement between Moscow and Tokyo, only specially registered vessels are allowed in the disputed waters. Russian and Japanese officials believe the seized boats were not authorized.

Kunashiri is part of an island chain Russia calls the Kurils. Japan, which calls it the Northern Territories , also claims ownership, and the dispute has kept the two countries from signing a formal peace treaty for more than 60 years.

In August 2006, Russian patrol boats fatally shot a Japanese fisherman and seized a vessel in the disputed waters, escalating tensions between the two nations.