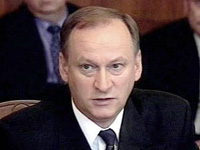 Nearly 100 foreign spies were detained in Russia in 2007, Russia’s spy chief said Wednesday. He added that the ex-Soviet Baltic nations have increased their espionage activity.

The comments showed that Russia’s intelligence and security services increased their presence both in Russia and abroad.

Britain’s and the U.S. concern that Russia and china are aggressively spying on sensitive Western facilities, intelligence systems and development projects were also confirmed.

Nikolai Patrushev, the head if the Federal Security Service – the min successor of the KGB, was quoted by RIA-Novosti, ITAR-Tass and Interfax news agencies as saying that foreign spies were mostly seeking information about Russia 's political system, economic interests and foreign policy moves.

He mentioned few specifics, although he cited the case of a Russian military General Staff employee who was convicted of passing state secrets. The officer, Maj. Gen. Yevgeny Veselov, was dismissed two years ago for using soldiers to construct his country home.

"Foreign intelligence services, primarily in the Baltic nations, intensified their activities against Russia in 2007," Patrushev was quoted by RIA-Novosti as saying. The three former Soviet republics of Latvia, Lithuania and Estonia are now members of NATO and the European Union.

Russian authorities also stopped "22 career officers and 71 agents of foreign special services" and four foreigners were deported for espionage, Patrushev was quoted by ITAR-Tass as saying.

Under President Vladimir Putin - himself a former KGB officer - Russian government officials have made more and more belligerent statements about the West's policies toward Russia. Moscow has singled out the United States and Britain in the past as posing a growing threat to Russia.