Vladimir Putin told his political party that Putin era in Russia is far from being over as he’s going to accept prime minister’s post after he leaves the presidency next year. 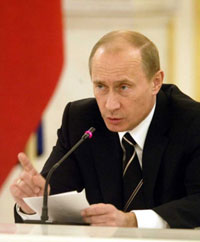 In making the announcement Monday, the Russian president, whose power still seems ascendant, finally settled on one of his many post-presidential political options, which had ranged from altering the constitution so he could run again to outright retirement, the AP reports.

Putin has pledged to accept a job that is, at least on paper, a demotion - perhaps confident of the power conferred by his enormous popularity, and by the loyalty of the fellow KGB veterans he placed in many of the Kremlin's most important jobs.

Putin presented his decision in a speech to leaders of the United Russia party, shortly before they voted to nominate the president's longtime protege, First Deputy Prime Minister Dmitry Medvedev, as their candidate in the March 2 presidential contest.

With the support of Putin and the Kremlin's tight control over the nation's media and political landscape, Medvedev appears certain to win.

After Putin endorsed Medvedev's presidential bid last week, the 42-year-old St. Petersburg-educated lawyer urged Putin to serve as his prime minister if he is elected. Putin waited for a week before responding.

Many here believe Putin would remain the real leader of Russia, whatever his title. But the incumbent pledged not to undermine his successor by strengthening the premiership and weakening Russia's strong presidential system.

"If the citizens of Russia show trust in Dmitry Medvedev and elect him the new president, I would be ready to continue our joint work as prime minister, without changing the distribution of authority," Putin said. Later, the party voted overwhelmingly to nominate Medvedev.

Putin looked on sternly from the podium as Medvedev accepted the nomination, and the younger man promised to follow the blueprint that Putin has drafted for Russia . The best way to do that, he said, was with Putin serving as head of his Cabinet.

"The full implementation of this strategy is possible only together with its author, Vladimir Vladimirovich Putin," Medvedev said.

While Putin cautiously vowed not to usurp power, Medvedev stressed that Putin will continue to wield "enormous" influence over Russia's affairs.

"I don't have the slightest doubt that Vladimir Vladimirovich Putin, in the future, will keep using his enormous political and professional resources, his influence both in our society and in the world, for the benefit of Russia and its citizens," he said.

Despite Putin's pledge not to undermine Medvedev, many analysts expect the center of power to shift from the presidency to the prime minister's post if Putin assumes the latter office.

Leonid Gozman, a leader of the liberal Union of Right Forces party, which failed to gain a single seat in the Dec. 2 parliamentary election, said the proposed power sharing between Putin and Medvedev was, at best, a temporary arrangement.

"It means either there will be a transfer of functions from the president to the premier, or Putin will think of something else, for example, either becoming general secretary of United Russia or changing the constitution to create the position of spiritual leader of the nation," Gozman said on Ekho Moskvy radio. "As it is, this construction appears extremely unstable."

But Boris Makarenko,deputy directorof the Center for Political Technologies, said on Ekho Moskvy radio that the two men will have a strong incentive to work together.

"A conflict between them would be fatal for both," he said. "It is in their interests to maintain a single center of power, even if it consists of two people."

Eventually, "it will become clear what will happen, how dual power will again give way to power in the hands of one person. Maybe Putin will gradually hand more power to Medvedev."

Some here took a more cynical view, saying Putin's decision amounted to little more than a political charade - a move that would enable Russia to stage presidential elections and claim to have a democratic government, while perpetuating the current power structure.

"It means one thing: Putin's team will remain in power," said Konstantin Remuchukov, owner and editor of the daily Nezavisimaya Gazeta, on Ekho Moskvy radio. "This is not an election but the distribution of roles within a single team. There has never before been such a situation in Russia ."

Eduard Limonov, an author and leader of the banned nationalist National Bolshevik Party, predicted Putin will continue to lead as before.

"There's no doubt Medvedev will play the role of the son, whom the emperor will loudly order what to do," he said. "It's a deception of society, and it means that Putin isn't going anywhere."

Putin's acceptance of Medvedev's offer came amid reports of infighting between different factions in the Kremlin, led by rival figures tied to Russian intelligence and security agencies.

Medvedev, seen as a moderate technocrat rather than a Kremlin hawk, has sometimes been described as the candidate of Kremlin moderates. Some analysts, though not all, believe that Putin sought to check the growing influence of the hard-liners by appointing a candidate from a different camp.

Putin, with approval ratings above 80 percent, has consolidated power during his nearly eight years in office by tightening the Kremlin's control of the media and of nominally independent institutions such as the courts and parliament.

He has insisted for years that he would relinquish power once his second presidential term ended. The Russian constitution limits presidents to two consecutive terms.

But as Putin's retirement date approached, he seemed increasingly wary of stepping down. Some analysts say he is the only figure with the ability to prevent the government from fracturing into rival camps.

In November, he said that a victory in parliamentary elections by United Russia would give him the "moral authority" to ensure that his policies are continued.

Some analysts say that Putin plans to accept the prime minister's post only as a temporary measure. If Medvedev were to step down, Putin could _ under the constitution - run again.

Monday's announcement came a few days after Putin led a Russian delegation to neighboring Belarus, to discuss long-stalled plans for a merger of the two former Soviet republics.

Some analysts said Putin hoped to become the president of the new, united Belarus and Russia . But the talks in the Belarus capital of Minsk apparently made little headway.

Medvedev, married with one son, is a trained lawyer who first caught the attention of Russia's future president in 1990, around the time both worked in St. Petersburg's city hall. For most of the next 17 years, Medvedev served as one of Putin's most trusted aides.