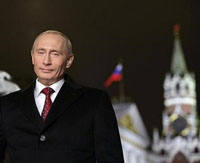 If Dmitry Medvedev is elected as Russia’s new president, Vladimir Putin would become his prime minister, the president said Monday.

Putin said that is he is a premier he will not seek to change the distribution of power between the president and prime minister. President is mush more powerful figure that prime minister in Russia, the AP reports.

Dmitry Medvedev suggested Putin to become his prime minister quickly after having been nominated as presidential candidate. But there was no response until today.

Putin's statement virtually ensures that the 42-year-old Medvedev, seen as business-friendly and non-hawkish, will be elected March 2.