Putin expected not to respond swiftly to proposal to become PM 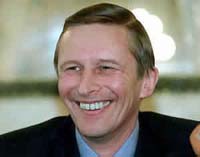 Putin expected not to respond swiftly to proposal to become PM

A senior government official seen as a close President Vladimir Putin ally said Wednesday that Putin was unlikely to respond swiftly to a proposal to become the prime minister.

On Monday, Putin said he supported a longtime protege, Dmitry Medvedev, to become Russia's next president - an endorsement almost certain to clinch an election victory for Medvedev. Medvedev returned the favor Tuesday, asking that Putin be his prime minister.

Putin, however, has not publicly commented on the offer.

"This is a very interesting proposal, but the president himself will decide whether or not to accept it, and probably (he will do so) later," the ITAR-Tass and RIA-Novosti news agencies quoted First Deputy Prime Minister Sergei Ivanov as saying.

Putin, due to step down in May, says the continuation of his policies is crucial for Russia and suggested he wants to maintain strong influence after leaving the Kremlin. Becoming prime minister would allow Putin to retain a strong measure of power without violating or changing the constitution, which prohibits presidents from serving more than two consecutive terms.

Putin said in October that he would consider becoming prime minister if the dominant United Russia party won a convincing victory in Dec. 2 parliamentary elections and if Russians elect a president he could work well with in March. United Russia won 70 percent of seats in parliament, and Medvedev - who has worked under him for nearly two decades - clearly fits the bill.

But as he has maneuvered before the end of his term, Putin has been careful to keep his options open and keep Russians guessing about his concrete plans. A Kremlin-connected political analyst, Gleb Pavlovsky, said Tuesday that while Putin was likely to accept the proposal, he would not make his decision public for some time, Interfax reported.

"Putin will have to think twice because such consent will constrain his maneuvers in the future, which he doesn't like," Interfax quoted Pavlovsky as saying.

Along with Medvedev, who is also a first deputy prime minister, Ivanov had also been long considered a leading candidate for anointment by Putin as his favored successor. But Ivanov praised Medvedev on Tuesday and said his election would ensure continuity of the policies Putin has pursued.