After 9 months of detention Russian reporter released from psychiatric hospital

After 9 moths of detention a psychiatric hospital released a Russian reporter who wrote critical articles about the military campaign in Chechnya. 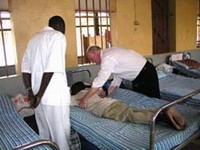 After 9 months of detention Russian reporter released from psychiatric hospital

Andrei Novikov was one of several journalists and opposition activists who have been committed to psychiatric hospitals in Russia in recent years - reviving a punitive practice widely used in the Soviet era.

Novikov was working as an online reporter for Chechenpress, a news service connected with Chechen separatist government, last December when he was convicted of sedition and inciting violence for two e-mail messages he sent to newspapers.

He was sentenced to three years in prison, but in January a psychiatric commission determined that he had "anti-social behavior" and on Feb. 14 ordered him committed to a hospital in Rybinsk, about 260 kilometers (150 miles) northeast of Moscow, Reporters Without Borders said in a statement.

Last month, another commission concluded there was nothing wrong with Novikov and a Rybinsk court ordered him released on Wednesday, the Paris-based journalism group said.

It was unclear if he had been released; authorities at the Rybinsk hospital could not be reached for comment late Wednesday and Novikov's relatives could not be immediately located.

"It seems that Russia' special service sand psychiatrists are still empowered to take charge of anyone whose words or actions stray from the Kremlin line," Reporters Without Borders said. "The use of punitive confinement is very dissuasive for all those who might be tempted to express their disagreement with the authorities."

During the Soviet era, dissidents were frequently committed to psychiatric hospitals as punishment for bucking Soviet policies and propaganda.

The practice has reappeared in recent years, most notably in July when opposition activist Larisa Arap was ordered to a psychiatric clinic in the northern city of Murmansk. Supporters said it was punishment for her critical reporting.

She was released six weeks later.